Representative Available Partnerships (Others are available)

Mountain Sky Ranch is excited to offer the following Fractional Alpaca Share Team (FAST) PacaShare partnership opportunities.  We have carefully chosen these animals from our herd, because we strongly believe that they all will produce outstanding offspring that will in all ways be improvements on their mothers.

Star has truly been a star for us here at the Ranch as a mother and a producer of improved quality crias (children) as we have bred her “up” to herdsires we knew would compliment her qualities and weaknesses.  Star is eight years old (prime of life), is extremely healthy, is a vibrant dark fawn color, and has birthed all her cria with no assistance.  She has both grey and black genes and can produce a variety of colors. 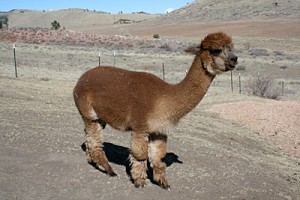 Star has very dense and crimpy consistent fleece.  More importantly, we have three of her youngsters here at the Ranch that all have vastly improved crimp over their mother.  In fact, we have recieved show ribbons from her son Rudy (Daybreak’s Rudy) who is also included as a bonus in this PacaShare partnership.  Rudy is just coming of age as a 2 year old and he could possibly be a herdsire for a commercial fleece production herd.  His fleece is a handspinners delight and he has received an impressive 94 out of 100 score in a fleece spin-off competition. 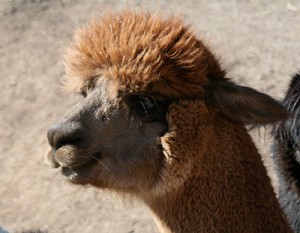 Star’s 2009 cria, Bubba (Mountain Sky’s Bubba) is a impressive Royal fleeced (19 micron or less) junior herdsire here at the Ranch.  He is like a fine wine as he is improving in his look and his fleece quality as he gets older.  He is still a yearling and he was a part of our 2009 show string.  He is just what we are looking for in our next generation from quality dam’s like Star.

Finally, we come to this years Star baby, Ellie (Mountain Sky’s Ellegance).  This gorgeous light brown girl is the reason that we have decided to sell share in her mother Star. We beleive we have upgraded mom (Star) so dramatically with Ellie that she will be able to even better carry on our goals for genetic improvement.  Ellie is as they say a “looker”.  She has a fine, dense and crimpy fleece that feels like butter in your hand.  She is going to be a “star” for us on our 2011 show string.

Finally, the best part!!  Star has been confirmed by ultrasound to be pregnant in a breeding to our exciting Snowmass herdsire, Incan Gold (Snowmass Incan Gold).  This young stud has less than 20 micron Royal fleece at almost six years old!! This is truly amazing to carry this fineness at his age.  Not only is he fine, he is dense, crimpy and consistent in his fleece quality from his head to his toes.  He is truly an impressive dude.  Lastly, his genetics are “off the charts”.  He is a son of the multple champion producer Snowmass Royal Rose.  If this baby is a girl the value of this PacaShare will be “a homerun” and we will have a showgirl for 2012 that will turn heads. 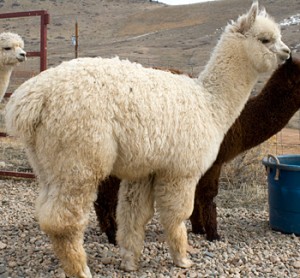 Bubba – Look at that fleece!

Koko is another of our solid mothers here at the Ranch.  She has proudly presented us with two quality boys, and we are hoping for a girl from her outstanding breeding of 2010.  Koko is a bay black eight year old who has at least 7-10 more breedings for her in her life.  She is an “easy keeper” who has been a great mom.  Her fleece is soft and dense with great color consistency.  She needs some upgrade in her fineness and we have seen that in her offspring. 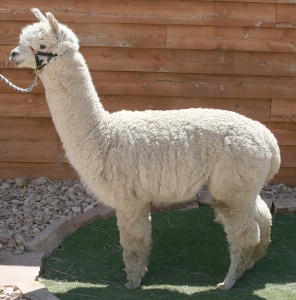 In 2010 Koko presented us with a true gem!  We bred her to our herdsire Klondike (AAA Klondike), a multiple show ribbon winner,  who has not disppointed us with the upgrading from all three of his breedings.  This Koko x Klondike pairing has produced beautiful Rose-Grey – Cammo (Mountain Sky You Can’t See Me) who will be on our 2011 showstring.  This young man has awesome long, silky, crimped grey fleece.  He is beautiful to look at with trud stud comformation.  Look for him to be winning as he starts his show career.

We have bred Koko to another of our outstanding Snowmass herdsires, Midnight Magic’s Thunder.  This true black guy carried less than 20 micron fleece at seven years old!!  You do not know how rare this is, as black fleece will normally “blow out” to up to 30 microns in the vast majority of black herdsires.  Unfortunately we have recently lost this incredible guy to a rare and chronic internal disease, but not before we were able to breed him to Koko (ulrasound confirmed – baby due in July 2011).  There will only be a few of this awesome guys progeny to move ahead, so this breeding is truly special.  Midnight was a regal and special guy and we will miss him, but Koko’s 2011 baby will help us with the pain.  You will really want to look at this partnership!!

OK, we are biased.  We admit it.  Lillabye is special to us becuase she produced our first cria born here at Mountain Sky Ranch (Sarita).  She and Sarita have provided us with some award winning photography proudly produced by Deb.  Lillabye is a beige four year old, who has been a great mother of two girls for us.

As mentioned above, Lillabye gave us 2009 baby girl named Sarita (Mountain Sky Sarita).  Sarita is a very fine  and bright in her fleece and we showed her with our 2010 show string.  Sarita is confirmed pregnant and we are excited about her 2011 first cria.

Lillabye came through again for us in 2010 with a baby girl, Diva (Mountain Sky’s Diva).  this white girl is just six months old but is showing us outstanding fleece and conformation characteristics.  Her staple length (fleece length) is amazing!!  Diva’s sire is a prominent local herdire Jubilant, owned by our friends Carl and Ann Bradbury.

Now for the best.  Lillabye is confirmed pregnant (by ultrasound) for a late July 2011 baby, out of our incredible new herdsire Ice Man (Snowmass Ice Man).  Wow, you have to see this guy.  He is the epitomy of a stud.  Regal, strong, virile, and bold are just a few of the adjectives for this big boy.  But most important he has under 20 micron fleece at seven years old!!  You really do not know how rare this is.  He is beige to light fawn in color but looks almost white when he is standing in the field.  With Lillabye’s history of producing two white girls that were both huge upgrades from her, we are very confident of an impressive cria for this pairing in 2011.

Visit Our Other Sites: