Can Raising Alpacas Be Sustainable?

Who Is Mountain Sky

Who Is Mountain Sky

We are Wayne and Deb Dorband and we would love to see you here in Colorado at Mountain Sky Ranch. We moved to our little piece of heaven in the foothills of the Colorado Rocky Mountains near the shadows of Longs Peak and Rocky Mountain National Park almost ten years ago. We wanted to get a piece of land where we could train our dogs and be close to our friends. Little did we know that we would soon embrace the lifestyle of sustainable and regenerative agriculture that we could demonstrate to others as an incredible way of life.

No way we could have guessed that a big part of our lives would be a very large herd of alpacas.  But they are!

We have gone through an amazing “ride” through the last nine years.  One big part of it has been the addition of alpacas to our already diverse permaculture strategy.  We believe we are now one of the pre-eminent elite alpaca breeders in North America. Our alpacas for sale and hire include the genetics of Hemingway, Leon, Felix, El Moustachio, Guellermo, Bueno, Plantel, Danko, Matrix, Elite, Quechua, Legacy, Jericho, Titan and more.

We have worked very hard to develop genetics, phenotype and most importantly fleece quality in our herd.  We strongly believe in lingering fineness (10 year old animals having <20 micron fleece), We are committed to the development of a sustainable EPD program and most importantly we want to breed animals that will consistently produce offspring that are as good or better than they are.

Are you competitive?  We are, and we like to win! We love to show alpacas and we understand clearly what it takes to win in the halter ring and in fleece shows.  We have consistently won banners and ribbons in the alpaca show world.  We know we can partner with you to do the same. 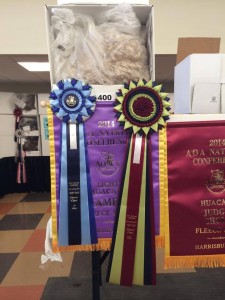 Most importantly, we are committed to demonstrating and showing others how alpacas can be one part of a regenerative  and sustainable farming operation. To us, regenerative farming means making a profit for the overall farming operation, making the planet better with as many of our activities as possible and finally touching people with what we are doing in a positive manner.  Talk to us how this might work for you also.

We’re excited to announce the newest addition to our herdsire row – Snowmass Matrix! What started as an afternoon drive to visit Double O Good turned into the most amazing opportunity, one which we never dreamt could happen. This impact male will be standing at Mountain Sky Ranch from November 1st until early next summer 2017, then rotating with our partners, Irish Meadows. Limited breedings are available now but once they are sold, Matrix will be restricted to in house breedings only. Don’t wait, call now!

Yes, we are crazy! No we do not need any more animals!  We just couldn’t resist buying him as Lot #7 from the Skinners (Snowmass) at the Futurity Auction. 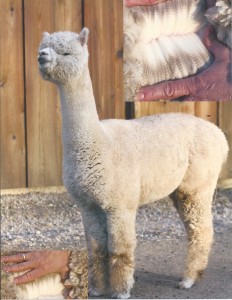 Yes, he is amazing! And, yes Legend is available to be bred to your white and light girls this season! Wait to you see his genetics.  You will not find another herdsire in America with more elite White genetics in both his male ancestors and his female ancestors.  In a full 5 generation pedigree he has no ancestors that are not white.  This is the rarest white genetics on the planet!

Here is his first cria on the ground that will likely be on the Snowmass showstring this spring. 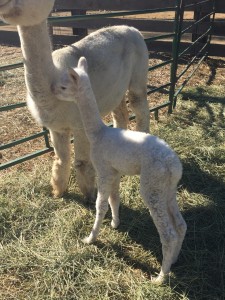 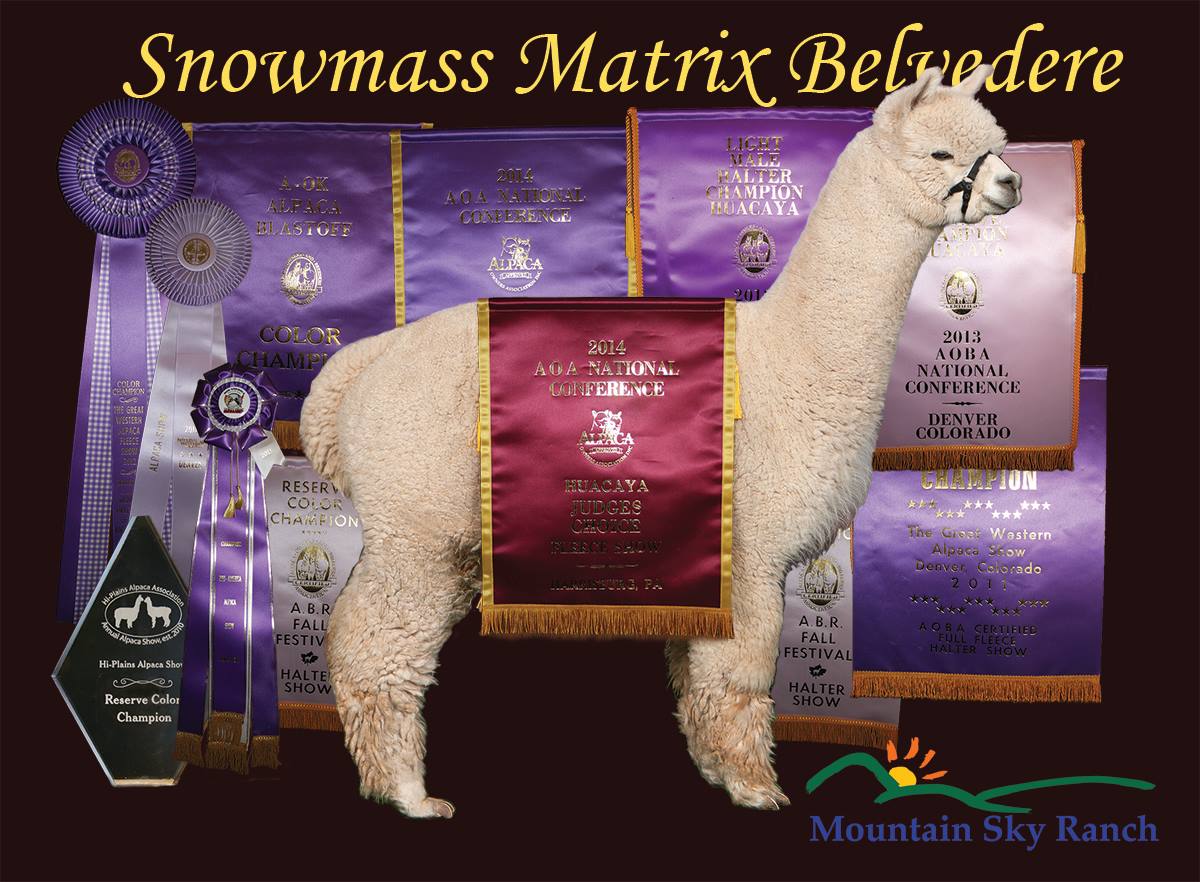 Snowmass Matrix Belvedere is now over seven years old.  He should be retired – right!  Well we thought so too, but when we sheared him in the late spring of 2013 we said to ourselves we have to show this fleece again.  It was the best to ever come off his body and off our Ranch.  So we did.

We showed this now 15 time Champion in three large eastern Fleece Shows in Spring 2014 and he won all three as Light Color Champion.  To top it off, he was also awarded the Judges Choice Award at the 2014 World Fleece Show in Harrisburg, PA.  That’s right he is an almost five year old World Champion!! 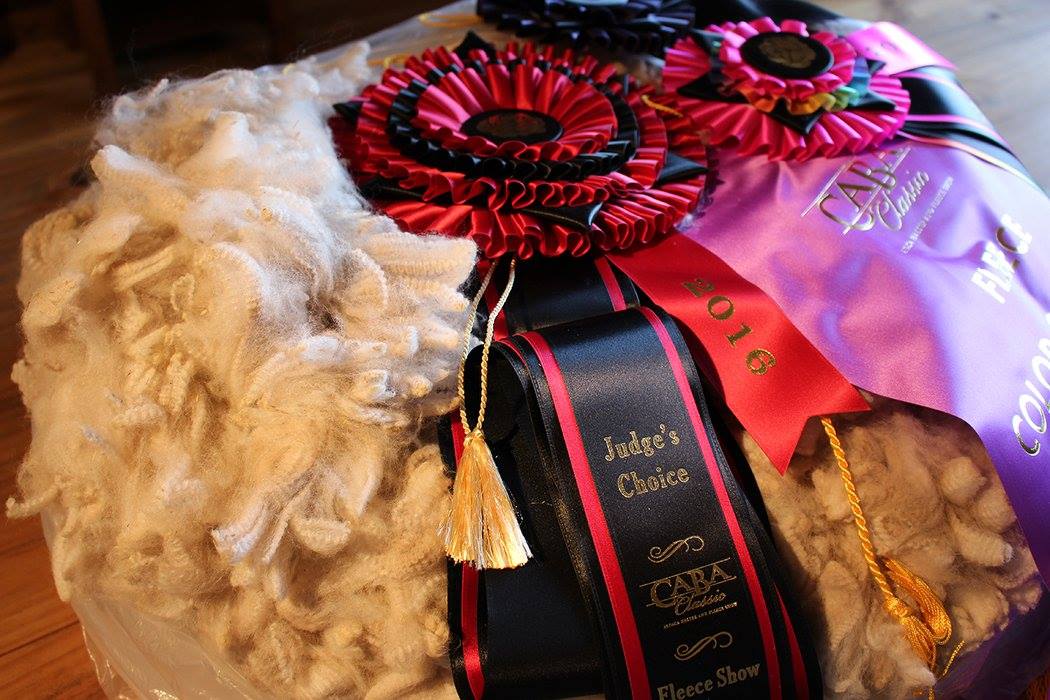 So what about now.  The fleece on his body looks as good or better than last year.  He has a little bit of a halo, but his primary’s are just as fine as his secondary’s. We just got his fiber stats back for 2016 and he is better than ever (still at 16 AFD).  His EPD’s are in the top 5% for everything but staple length! Finally, you should see his cria on the ground.  Of his two that were shown in his first group both have won banners.

He is closed to outside breedings.  The only way you can get his genes right now is by buying one of his offspring, or buying a girl he is bred to.  Several girls that could be bred to him or are already pregnant will be available to purchase at the Priority Sale, Futurity Auction and Nationals Auction. Call us or come and visit.

Looking for the Best Deals? Check out what We have! Click Here!